In our last posting on linear actuator systems we discussed thread accuracy, linearity and backlash in leadscrews, ball screws and linear slides. We’re going to continue with that discussion by considering other important parameters.

Let’s start this discussion with the bearing supports for the lead screw. Let’s assume we have a ACME screw that is 18” long and it provides 12” of travel. We have 3” on both ends that have been machined down past the root of the thread to form a smooth surface to install bearings that will support the screw. Let’s place the screw so it’s oriented left to right and our stepper motor and its coupling is on the left. We could install a number of bearing combinations on both ends of the ACME screw that’s easier to define with a table:

Let’s start with the “simple-free” combination with the left bearing area having a single bearing and the right 3” bearing area just hanging in the breeze. It’s easy to see, at least I think it’s easy to see, that you could fit the lead screw through a single bearing on the left at many angles.  Another way to look at a single bearing with a free end is to place a point on a piece of paper (this represents the bearing) and draw as many straight lines through that point as you can.  You would have an infinite number of lines because you need at least two points to define a straight line. Now the single bearing and the left bearing area of the ball screw has fairly tight machining tolerances, but there has to be some clearance to slide the shaft into the bearing. This will limit the number of straight lines you can draw through the point on the paper. Thus, when the motor’s shaft spins the screw, the right end of the screw is going to wobble like crazy. Not a good situation.

The “fixed-free” is a bit better because the left bearing area has two bearings supporting it keeping the left mounting area very straight  (two points defining a straight line, but the two points are close to each other) which in turn helps keep the rest of the screw straighter.

Spin the motor’s shaft again and the right end of the screw is probably going to wobble because of the screw weight will bend it slightly.

“Simple-simple” is like defining a line with two points that are far apart, a much better way to define a line. But wait, we can do even better by going to “fixed-simple” or “fixed-fixed”. These configurations define the straight line with three and four points respectively and the points are far apart.

The ball screw might vibrate at certain speeds. Kind of like a tire that’s not properly balanced. It’s fine at, say 40 MPH, but the steering wheel shakes when you’re doing 65 MPH. The speed at which the screw wobbles the most is called the “critical speed.”  The critical speed would be really low in the “simple-free” configuration and a bit higher or better in the “fixed-free” setup.

The critical speed would continue to improve (be higher) with a “simple-simple” configuration and improve yet again as you move to “fixed-simple” and “fixed-fixed.” Obviously, the more bearing supports you have, the more expensive it will be and the ball nut that’s attached to the flat plate that we’re trying to move adds an additional “point” to the “straight line” too. Critical speed is also a function of the screw length, diameter, and load. For more  info, Google “lead screw critical speed.” 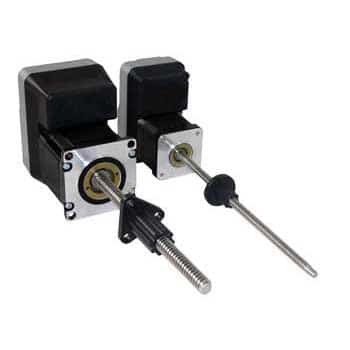 Which Motors Are the Best: Servos or Steppers?